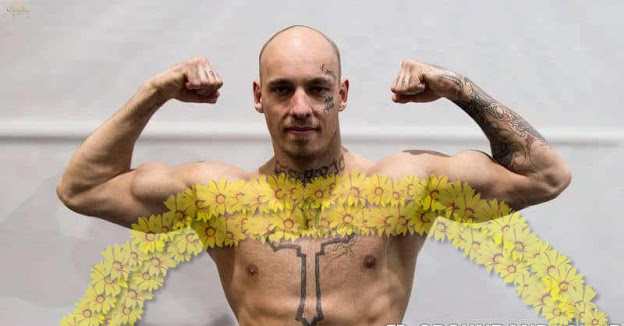 ‘My Wife was Fired for Converting to Islam’

My faith is now strong enough

that I can recognize the one true God

and recite the Shahada

to be able to say proudly,

yes I am a Muslim

Wilhelm “The Amazing” Ott is a European Champion of MMA, from Austria, who converted to Islam in April. He said that the Coronavirus Covid-19 pandemic led him to find his true faith. During Ramadan he happily announced that his wife, Michele Birringer, had also converted to Islam.

He recently announced the sad news that when his wife went to work wearing the Hijab, she was sacked. In a touching instagram post titled “my wife got her termination today because of a headscarf” in which he detailed how she was fired “because the headscarf doesn’t fit at work”.

After conversion she felt she should quit the job, as the job had a haraam nature but due to the economic crisis decided to wait until it was over to start looking for a new job. The couple took that bad news in a positive light as Ott revealed they took this as a sign from Allah “It is a sign of Allah that this job is the wrong one. Alhamdulilah”

When Ott himself found Islam, it took him a long time to convert as he said “I let myself be influenced politically. But when I had hard times, the Islamic faith gave me the necessary strength”. Once he took the step and converted he was overwhelmed with positive messages. He said “It wasn’t my intention that it would be that big. I actually posted it because people around me and friends know it”

My faith is now strong enough

that I can recognize the one true God

and recite the Shahada

to be able to say proudly,

yes I am a Muslim

Wilhelm Ott, who has an enormous Christian cross tattooed on his chest, took on the name Khalid at conversion. Khalid is the name of a companion of the Prophet Muhammad who was known for his strength as the commander of the Muslim armies. For his strength he was bestowed the title “SayfAllah” meaning the Sword of Allah.

It is not clear if Khalid will remove some of his tattoos, some have said that he is considering it.

The couple’s conversion wasn’t without its struggles, Ott revealed “After we converted people were afraid that we would become radical”. He and his wife remain strong to their new found faith as he said “She says that she will continue to wear her headscarf proudly” and for himself he says “My faith is now strong enough that I can recognize the one true God and recite the Shahada to be able to say proudly, yes I am a Muslim”

While the couple are in good spirits despite this, it raises the question regarding Islamophobia in the West. To the backdrop of ‘Black Lives Matter’ protests across the world, Muslims face severe discrimination. The 2017 EU Minorities and Discrimination Survey found that one in three Muslims had faced discrimination and the European Network Against Racism revealed that their research showed that Islamophobia can especially impact women in the job market.