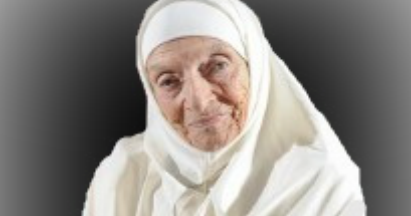 The 92-year-old Georgette Lepaulle from Berchem (Belgium) is the oldest muslim convert in the world. Last year she became Muslim. “Especially the friendliness of the people attracts me. And Allah has been a few times my prayers.”

With the introduction Georgette holds her hands deep in the sleeves of her djellaba. She refuses the outstretched hand. “You should not take this personally, but since I am Muslim, I get no strangers anymore. I will only touch my husband. Not that I have wedding plans. What should a widow of 92 still a virgin? ” Then splashes Georgettes loud laugh at. The roaring laughter of “Muhammad Maddah” is still on.

Georgette and Mohammed are already more than 40 years neighbors. Then two years ago Georgettes her family in a nursing home wanted to quit, Muhammad obstructive. His neighbor had come to live with his family. That could not be a problem because Muhammad’s wife, son and two daughters knew Georgette all throughout their lives. Muhammad was actually just lost his own mother. Georgette would recover that loss.

“By coming here to attend, I pulled in Islam,” says Georgette. “I saw these people pray together. I saw how caring they interact. How they talk to each other. How important family is to them. Totally different from my cold family. Since my conversion, I have not heard from my 72 year old daughter. “

Last summer went by Georgette Mohammed was a family visit to Morocco. That was just in Ramadan, the fasting of the Muslims. “I knew what fasting is, because I’m Catholic. I was baptized, went to the nuns at school, church was twice married and have my two husbands an ecclesiastical burial. During my working life I was a maid in a Jewish family. But religion has never touched me. On the contrary. I lived quite apart from God. On my fifth I smoked my first cigarette and my last on my 78th. On my seventh drank my first glass of alcohol and for my conversion I drank half a bottle of wine every day. That was a habit from my first marriage with an Italian fighter pilot in the war was killed. “

During her participation in Ramadan last year by Georgette a deep religious feeling awakened. She was shocked by themselves. They’re so late in her life another completely new experience would get. For the first time she had contact with something higher. With Allah. She felt his openness. His love. She asked him the healing of a friend and the rescue of a little boy who was on the wrong track. Her two bedes are interrogated. That was the sign for Georgette to apply to convert to Islam.

Women have Georgette was completely washed. That was her ingress ritual. “Then they continued to kiss me. So glad they were because I was a sister of them. I’ve never been kissed so much – you probably know by women – as since entering Islam. I’ve got something must surrender. Beverage, tobacco, pork and – it is not easy for a woman – even makeup. Previously I put the makeup always in thick layers. “

Back in Belgium, they went to the big mosque in Brussels for a certificate for Noor Islam – that is the new name of Georgette. The mosque in Brussels reported the conversion of the then 91-year-old Belgian woman immediately to the mosque in Mecca. Wherein they plunged into the archives but found no older converts. Immediately, the king of Saudi Arabia them informed that an envoy to Berchem sent with a gold watch for Georgette. Plus an invitation to next year at his expense to come to Mecca. The Saudi television will follow her. But the VRT was for them. Famous Everyone turned in a report on Georgette.

It’s a dirty question, but they must be asked: Georgette had paid for something to convert to Muslim? She looks very strict and yet again that loud laugh: “Money has nothing to do with it. I took this decision entirely voluntarily. Everyone is free to do so. Others should not follow my example. “