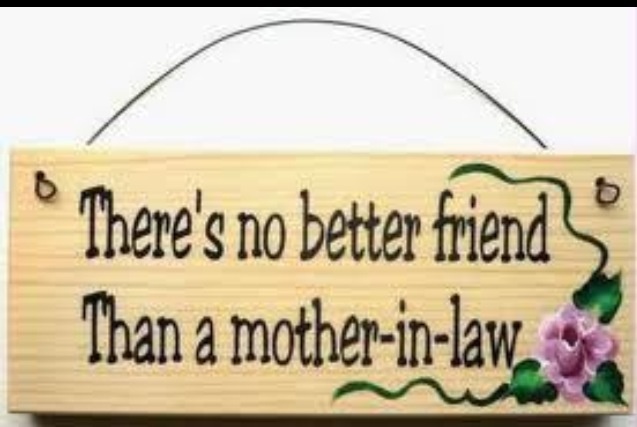 How to be a good mother-in-law

We are all familiar with the persona of the stereotypical mother-in-law — a woman generally portrayed with an intrusive and critical nature. Mothers-in-law are derided in comedy sketches, in horror stories, in books, and in real life.

Mother-in-law, the person who is considered a busybody. Mother-in-law, just saying the name conjures up all sorts of connotations!

Do all mothers-in-law live up to this nefarious reputation? Obviously not. But enough seem to play so powerful a role in the dynamics of their son’s and/or daughter’s marriage that warrants special attention.

How to be a good mother-in-law… infact Become an A+ Mother-In-Law.

Arriving at her home:

When you arrive at her home, if she apologizes for the mess, tell her you didn’t come to see the house – you came to see her. Ignore any mess, it’s unimportant. After all, she is her husband’s companion and helpmate, and is responsible for the affairs of the household, the physical and emotional well-being and the training of the children.

Touch her, hug her, whatever your heart tells you to do. Remember she is now your daughter and try your utmost to treat her as such.

Exchange gifts and remember her:

While you are with her, keep vigilant; you will pick up on her wishes and tastes. Surprise her with little things that you know she will like. She will love you for remembering. When you buy gifts, don’t give your son,daughter/s and grandchildren something spectacular,and your daughter-in-law some little trinket. Try to look for something for her just like you do for your own children. Remember to desire for her what you would desire for yourself.

Ask her for her opinion:

We’re never too old to learn new things. She will appreciate seeing the things that she has taught you. Ask her for her opinion in certain matters and acknowledge that you appreciate her advice. Ask her for her views and opinion as often as possible on matters big or small. It is not enough for daughters-in-law to understand mothers-in-law. Mothers-in-law must accord daughters-in-law the privilege of understanding them. Share knowledge and confide in one another as often as possible regardless of what they say about rarely confiding in those who are better than we are. Whenever possible allow her to participate in the decision making pertaining to family matters.

Talk with her, often in private if that is possible. Sit down and have a conversation with your daughter-in-law. Don’t tear into her by giving the third-degree. You won’t be respected if you’re intimidating. The tone should thus be one of mutual respect, kindness, love and compassion and harmonious mother daughter-in-law interaction between the two.

Remember unsolicited advice is not useful, and may be taken as criticism.Try not to give advice ALL the time unless it is asked for, although that may be difficult. You probably have given more than you should. Help them to bear responsibilities which would be difficult or impossible for them to handle on their own. Try to be supportive and helpful but not intrusive.Offer support but don’t push. Avoid prying into their affairs and avoid taking sides whenever arguments arise.

Do not ridicule or unnecessarily criticize her. Avoid one upmanship. Do not compete with your daughter-in-law. Show your love openly for her. Dont criticize your child in front of his or her spouse and dont criticize the spouse. Neither one appreciates this.

Look for the good in her. Don’t look for the flaws. Nobody is perfect and no-one marries a perfect being.

Try to be interested in the feelings of your daughter-in-law. Try not to overshadow her; with your interest only in your granchildren and son. Try to show interest in her well-being,also. Try to show her the same attention and make her feel loved and wanted. She is to be regarded and treated as a human individual whose character and personal attainments, her modesty and dignity and her role as wife and mother are the sources of status and respect within the family structure.

Be a good listener:

Sometimes that is all your daughter-in-law wants.

Encourage her husband (your son) to help his wife with the household chores whenever possible. Remind him that our Beloved Nabee(Sallallahu Alayhi Wasallam) did it and that he highly recommended that we follow his example.

Do not be insistent on them to visit. Do not expect or want everyone to spend every holiday or weekend with you. Sometimes they just would like to have a holiday or spend time on their own. Don’t complain that visits with your children and grandchildren are too infrequent. If your son visits you, don’t insist that it should be every month and then call him to make sure that it is. Be content with whatever time he can give you. Appreciate and respect their privacy so that mutual love can develop. Dont try to force your married children to spend time with their married siblings. They are old enough to arrange their own time together. (“My mother-in-law is constantly suggesting that we should entertain my brother and his wife every week. We love them, but neither of us has the time, money or desire to do so.”). This can create problems.

In order to maintain a stable and permanent relationship do not impose your will on the children. Bear in mind at all times that we are all surrounded by a network of many other relationships with relatives and friends. This also gives each partner his or her own life apart from the spouse, with many other satisfying relationships, emotional outlets and sources of support.

When you call them, if your daughter-in-law answers;talk to her and hold a conversation then ask to speak to your son and granchildren. There is nothing worse then feeling like you don’t matter.

Dont correct your grandchildren constantly:nor should you expect perfection. Everyone has their own idea’s on discipline. Enjoy them. Rearing them is not the mother-in-law’s responsibility.

Dont insist to be included when your married children tell you of some special plans. If they want to include you they will. Do not force your company on them if they decide to go away for a while to be on their own. Learn to respect their decisions.

Part of the problem between mother-in-laws and daughter-in-laws is about “control”. Sometimes new wives see their mothers-in-law as a threat or a possible enemy. Any mother-in-law that tries to control their child when they are grown and married is cheating herself out of a possibility of a relationship with the daughter-in-law. Marriage in Islam is not a sacrament but rather a legal, binding contract between your son and your daughter-in-law which establishes the permanence and responsibility of their relationship, an acceptance of one another as spouses with mutual commitment to live together and to be mindful of their responsibilities to one another in all aspects of their interaction.

“My mother-in-law tells other family members about problems we discuss”: It is important that private discussions and the welfare of the daughter-in-law remain just that — private.

Avoid back-biting and Fithnah. Remember you have gained another daughter who would appreciate your motherly help, encouragement and support.

Look for things you have in common. The most important is that you BOTH love your son(her husband) and want what’s best for him. She should love and obey her husband (your son) and for his part he (your son) should be considerate and concerned for her welfare. Encourage your son and daughter-in-law to provide a loving atmosphere in their home and consistent approach to training in which the entire family can reinforce and support one another.

If you don’t like each other, at least try to be civil to each other. Remember, your son is married to this person. If you don’t respect your daughter-in-law, you just might destroy your relationship with your son and any grandchildren. Be tolerant and forbearing in your interaction even when there are differences or friction of one sort or another. It is essential that family ties must not be severed due to any differences. In such a relationship strains and problems sometimes do arise. When they do, they should be dealt with within the family unit by showing tolerance and patience.

Your daughter-in-law will most likely do things differently than you. If it bothers you, just smile and bear it. Don’t try to dictate how things should be done. In the end, the little details aren’t important. Don’t let them cause tension between you.

Show your love openly in order to be loved. Tolerance and mutual respect is basically a stable and viable institution where there exists understanding and genuine love. Is it not said that love knows hidden paths. Make it known to your daughter-in-law that her role as mother and wife is regarded as being of the highest importance, the most serious and challenging responsibility she could have. Make it known that, she has your support since you have been down that route(ie. as a daughter-in-law).

If you happen to be a mother-in-law to your daughter’s husband( son-in-law), love him and treat him just as if he were your son and the above guidelines will be equally applicable.

Traditionally, however, it appears to be the mother-in-law with whom these issues emerge. Needless to say, some of the comments above may be relevant to fathers-in-law as well as mothers-in-law. In order to sustain the key elements of a wonderful relationship with your daughter-in-law/ son-in-law a concerted EFFORT is to be made in establishing and maintaining it. Nonetheless, as this article has concentrated on the mother-in-law; it is not intended to portray a one sided approach or to demonise her; Equally to sustain and mantain this balance; it would demand that the daughter-in-law/ son-in-law play their part. As the cliche’ goes: “It takes two hands to clap”. It is not within the scope of this article to address the latter.

Wouldn’t every mother-in-law like to hear these comments from her daughter-in-law ?

“Jazakallah , for being there for me and for raising your son to be the best husband and father anyone could ask for. You are not just my Mother in Law, you ARE my Mother!.”By AL-Islaah Publications