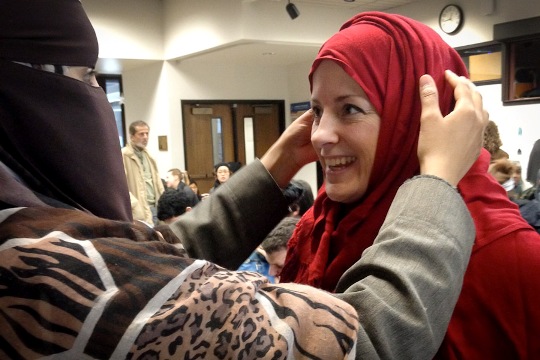 Hijabed Like Me: A Non Muslim Woman Experiments with Hijab

I walked down the street in my long white dress and inch-long, black hair one afternoon, and truck drivers whistled and shouted obscenities at me.

I felt defeated. I had just stepped out of a hair salon. I had cut my hair short, telling the hairdresser to trim it as she would a guy’s.

I sat numbly as my hairdresser skillfully sheared into my shoulder-length hair with her scissors, asking me with every inch she cut off if I was freaking out yet. I wasn’t freaking out, but I felt self-mutilated.

It wasn’t just another haircut. It meant so much more. I was trying to appear androgynous by cutting my hair. I wanted to obliterate by femininity.

Yet that did not prevent some men from treating me as a sex object. I was mistaken.

It was not my femininity that was problematic, but my sexuality, or rather the sexuality that some men had ascribed to me based on my biological sex.

They reacted to me as they saw me and not as I truly am.

Why should it even matter how they see me, as long as I know who I am? But it does.

I believe that men who see women as only sexual beings often commit violence against them, such as rape and battery.

Sexual abuse and assault are not only my fears, but my reality.

I was molested and raped. My experiences with men who violated me have made me angry and frustrated.

The experiences have left me with questions about my identity.

Am I just another Chinese-American female? I used to think that I have to arrive at a conclusion about who I am, but now I realize that my identity is constantly evolving.

MY EXPERIENCE OF BEING HIJABED

One experience that was particularly educational was when I dressed up as a Muslim woman for a drive along Crenshaw Boulevard with three Muslim men as part of a newsmagazine project.

I wore a white, long-sleeved cotton shirt, jeans, tennis shoes, and a flowery silk scarf that covered my head, which I borrowed from a Muslim woman.

Not only did I look the part, I believed I felt the part. Of course, I wouldn’t really know what it feels like to be Hijabed-I coined this word for the lack of a better term-everyday, because I was not raised with Islamic teachings.

However, people perceived me as a Muslim woman and did not treat me as a sexual being by making cruel remarks.

I noticed that men’s eyes did not glide over my body as has happened when I wasn’t Hijabed. I was fully clothed, exposing only my face.

I remembered walking into an Islamic center and an African-American gentleman inside addressed me as sister , and asked where I came from. I told him I was originally from China. That didn’t seem to matter.

There was a sense of closeness between us because he assumed I was Muslim. I didn’t know how to break the news to him because I wasn’t sure if I was or not.

I walked into the store that sold African jewelry and furniture and another gentleman asked me as I was walking out if I was Muslim. I looked at him and smiled, not knowing how to respond. I chose not to answer.

BEING HIJABED CHANGED OTHERS’ PERCEPTION OF ME

Outside the store, I asked one of the Muslim men I was with, Am I Muslim? He explained that everything that breathes and submits is.

I have concluded that I may be and just don’t know it. I haven’t labeled myself as such yet. I don’t know enough about Islam to assert that I am Muslim.

Though I don’t pray five times a day, go to a mosque, fast, nor cover my head with a scarf daily, this does not mean that I am not Muslim. These seem to be the natural manifestations of what is within.

How I am inside does not directly change whether I am Hijabed or not. It is others’ perception of me that was changed. Repeated experiences with others in turn creates a self-image.

HIJAB AS OPPRESSION: A SUPERFICIAL AND MISGUIDED VIEW

I consciously chose to be Hijabed because I was searching for respect from men.

Initially, as both a Women’s Studies major and a thinking female, I bought into the Western view that the wearing of a scarf is oppressive.

After this experience and much reflection, I have arrived at the conclusion that such a view is superficial and misguided: It is not if the act is motivated by conviction and understanding.

THE MOST LIBERATING EXPERIENCE OF MY LIFE

I covered up that day out of choice, and it was the most liberating experience of my life.

I now see alternatives to being a woman.

I discovered that the way I dress dictated others’ reaction towards me. It saddens me that this is a reality.

It is a reality that I have accepted, and chose to conquer rather than be conquered by it.

It was my sexuality that I covered, not my femininity. The covering of the former allowed the liberation of the latter.

This article was originally published in Al-Talib, the newsmagazine of the Muslim Students’ Association of the University of California in Los Angeles (UCLA) in October 1994. At the time of its publication, Kathy Chin was a senior at UCLA majoring in Psychobiology and Women’s Studies.

Allah’s command in the Qur’an:

And tell the believing women to lower their gaze (from looking at forbidden things), and protect their private parts (from illegal sexual acts, etc.) and not to show off their adornment except only that which is apparent (like palms of hands or one eye or both eyes for necessity to see the way, or outer dress like veil, gloves, head-cover, apron, etc.), and to draw their veils all over Juyubihinna (i.e. their bodies, faces, necks and bosoms, etc.) and not to reveal their adornment except to their husbands, their fathers, their husband’s fathers, their sons, their husband’s sons, their brothers or their brother’s sons, or their sister’s sons, or their (Muslim) women (i.e. their sisters in Isl m), or the (female) slaves whom their right hands possess, or old male servants who lack vigour, or small children who have no sense of the shame of sex. And let them not stamp their feet so as to reveal what they hide of their adornment. And all of you beg All h to forgive you all, O believers, that you may be successful. (An-Nur 24:31)

O Prophet! Tell your wives and your daughters and the women of the believers to draw their cloaks (veils) all over their bodies (i.e.screen themselves completely except the eyes or one eye to see the way). That will be better, that they should be known (as free respectable women) so as not to be annoyed. And All h is Ever OftForgiving, Most Merciful. (Al-Ahzab 33:59)