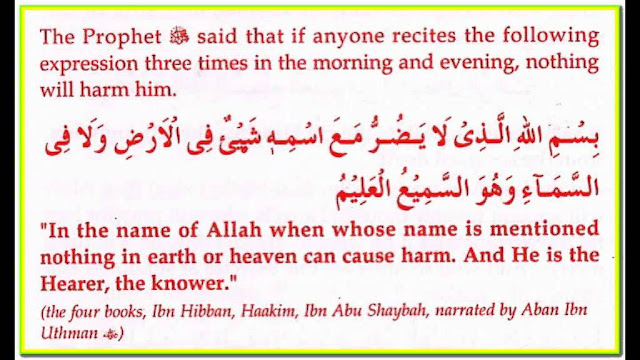 Khawlah Bint Hakim narrated that Allah’s Messenger (peace be upon him) said: “Whoever arrives somewhere and says: ‘I seek refuge with Allah’s complete Words from the evil He has Created (A’oodhu bi-Kalimaathillaahi- Ath-Thaammaathi min-Sharri maa Khalaq),’ nothing will harm until he leaves that place.” (Sahih Muslim, no. 2708)

In Taysir Al-Aziz Al-Hamid (p. 146), Sulayman Bin Abdullah relates that Al-Qurtubi commented on this by saying: “And this is true and real, and I believe in it due to the textual proof as well as my own experience. Since I heard this narration, I would constantly act upon it and nothing was able to harm me until I left it.

One night, I was stung by a scorpion in Al-Mahdiyyah (a province in Tunisia). So, I thought to myself until I realized that I had forgotten to seek refuge using these words.”

In Al-Qawl Al-Mufid (1/155), Al-Uthaymeen commented on this Hadith: “This protection is from all human and jinn devils – whether they are visible or invisible – until the person leaves that place. And there is no way that what is described in this narration will not take place, as these are the words of the truthful one who is believed (i.e. the Messenger of Allah)!

However, if what is mentioned in this narration does not take place, it is because of a preventative factor and not because of a deficiency in the method itself or the narration.

This also applies to anything that the Prophet (peace be upon him) mentioned as a Shar’ee method in which the desired outcome is not achieved. So, this is not because of a fault in the method, and is rather because of the presence of an obstacle that is blocking the desired outcome. For example, reciting ‘Al-Fatihah’ for a sick person is a form of healing. Some people recite it and find that the sick person is not healed.

This is not because of a deficiency in this method, and is instead because there is something present that is preventing this method from bringing about its desired effect.

Another example is mentioning Allah before having sexual intercourse in order to prevent Satan from harming the future child.  Some people will mention Allah and find that Satan still ends up harming the child due to something that is preventing this effect from being achieved.

So, you should check yourself to figure out what the obstacle is so that you can remove it and experience the effect of the method.”